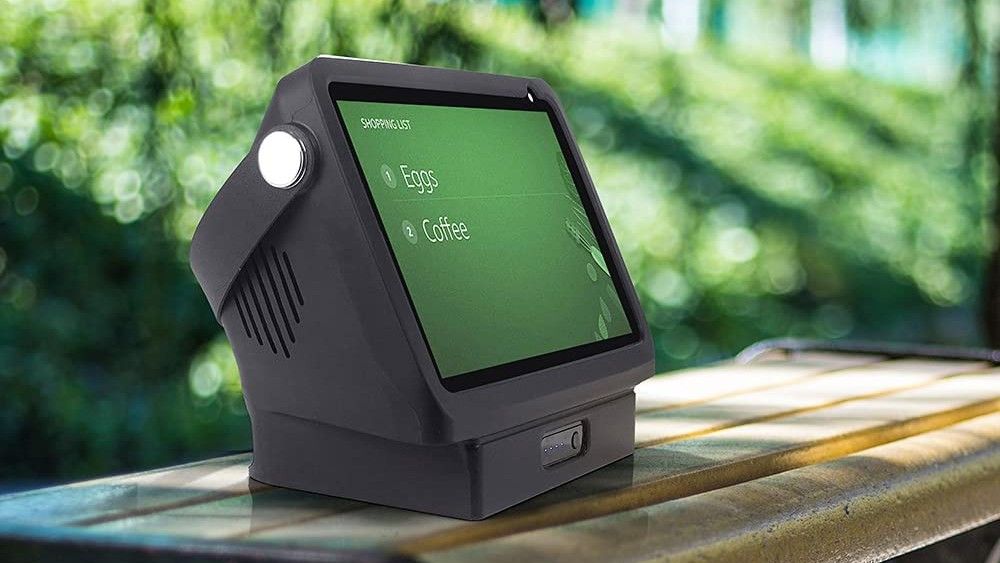 Amazon’s Echo Show smart displays are the perfect gateway into the convenience of the Alexa voice control ecosystem. The Echo Show 8, in particular, sports a robust feature set including a 1280 by 800 pixel HD resolution, stereo speakers, a 13-megapixel camera, Wi-Fi 5 connectivity, and a responsive touchscreen.

It’s a well-thought-out product backed by efficient engineering decisions, but there is one powerful way to improve it. Placing a stand underneath the Echo Show 8 makes it quite a bit more versatile by allowing for multiple directions of adjustment and, in some cases, battery power that frees you from the tether of a wall outlet. The added height also improves the sound quality somewhat while making it easier for Alexa to hear voice commands.

There are several great stands to choose from, but they might not be quite streamlined enough for everyone. While the Show 8 isn’t massive like the Echo Show 10, you can reclaim some counter space by attaching it to a wall mount. There are far fewer mounts than stands to consider, but there are still a couple of worthwhile options that are good-looking and dependable enough for anyone.

Since it boasts the official Made For Amazon certification, you can rest assured that the EchoGear Tilt + Swivel offers a reliable magnetic connection and is as durable as they get. As you might be able to guess from the name, it offers a wider range of motion than most others, able to swivel 360 degrees with 50 and 28 degrees of upward and downward tilt, respectively. The base also doesn’t take up much room, so it minimizes wasted counter space. In terms of construction, it’s made from rugged aluminum with a nonslip rubber ring on the bottom.

One of the few drawbacks of the Echo Show 8 is that it doesn’t have an internal battery. This well-made stand fixes that, offering up to four hours of runtime without being plugged into the wall. There are four LEDs on the front to let you know just how much charge is left, and you can tilt it forward and backward to get just the right viewing angle. It’s also a bit taller than most of the competition, adding range to the unit’s audio and Alexa’s hearing. The only real negative is that it can’t rotate to the left or right.

They don’t get much more affordable than the Sintron Adjustable, which is perfectly functional despite the low price. It can spin all the way around and offers a bit of upward and downward tilt, although not as much as some others. Interestingly, it works with both the original and second-generation Echo Show 8, in case you haven’t yet upgraded to the new version. Since it’s not very expensive, it’s no surprise that it’s made from plastic instead of metal, but it’s still relatively durable.

If you want to get your Echo Show 8 off the countertop without permanently installing it on the wall, the PlusAcc Wall Mount is the way to go. It’s little more than a simple shelf, but it does offer specialized cable management to keep things neat and tidy. It comes in black and white to suit your kitchen decor and is the best choice for keeping your smart display away from spills and food spatter. It’s also not very expensive.

Who said the Echo Show 8 has to stay in one place? With the Liboer Battery Base, Amazon’s most popular smart display transforms into a fully portable device with a maximum runtime of over nine hours. There’s even a rugged handle on top for easy carrying and four lights on the front telling you how much juice is left. To get this kind of portability, though, it sacrifices both tilt and rotation functionality, and it isn’t exactly lightweight. It is, however, resistant to dust ingress and relatively safe from bumps and short drops.

If you prefer to stick to OEM device add-ons, the Amazon Echo Show 8 Adjustable Stand is your only choice. Probably the biggest pro is that it’s perfectly matched with the Glacier White and Charcoal colors that the Show 8 comes in, so you won’t ever be frustrated by a barely off shade of white. Although it’s only plastic, it is pretty well-made and can tilt up and down so you can see it better. Unfortunately, it doesn’t rotate left or right.

The AtopHK Wall Mount is the most streamlined and discreet option for the Echo Show 8. Aside from the slim yet durable aluminum arm, the only thing you’ll be able to see once it’s installed is the Show 8 itself. If you’re a minimalist and don’t want to waste any counter space, there aren’t any better options. It rotates almost 180 degrees in either direction, but there’s no tilt functionality. The biggest drawback is that you’ll have to drill holes into the wall to install it.

No matter which version of the Echo Show 8 you have, the PlusAcc Show Stand can hold it securely. Six neodymium magnets mean it won’t fall out, even when you’re taking advantage of the stand’s above-average range of motion. The base is wide and stable, with a rubber ring on the bottom to keep it from sliding around. In addition to its sturdy construction, it’s also one of the most affordable options.

While a stand is a pretty simple piece of equipment, there are some very different options for the Echo Show 8. The Mission Cables Battery Base is one of the most interesting because it adds four hours of battery life to a smart display that otherwise has to be plugged in at all times. This adds considerable home functionality, because you can use it in any room without sacrificing tilt and rotation functions. As such, it was a clear choice for our Premium Pick.

The EchoGear Tilt + Swivel also gets high marks because its aluminum body is rigid and as premium as it gets. Its wide range of motion and midrange price make it the best choice for most people, so it’s an easy Editor’s Choice. By contrast, the Sintron Adjustable doesn’t have the same premium feel but is still reasonably durable, highly adjustable, and a great value.

Another novel stand worth mentioning isn’t so much of a stand as it is a case with a battery in it. In other words, it turns the normally stationary Show 8 into a fully portable smart display. The battery life is nothing to sneeze at, either, offering over nine hours of use from a full charge. The sturdy handle on top only further reinforces the impressive portability.

If you want to take your Echo Show 8 placement to the next level, though, consider a wall mount. Unfortunately, there aren’t any worthwhile under-cabinet mounts, but the two wall mounts are worth a look. The PlusAcc Wall Mount is basically just a shelf, but it’s the perfect size for the Show 8 and lets you hide most of the cable inside for a more streamlined appearance. The AtopHK is sleek in a slightly different way, as it lacks the shelf and instead lets you affix the Show 8 directly to the arm. Unfortunately, it lacks the same quality cable management as the PlusAcc.